In My Whole Foods Feelings

This week, Nick and I accepted the Supplier of the Year award for the South region of Whole Foods. It got me feeling all sorts of ways. 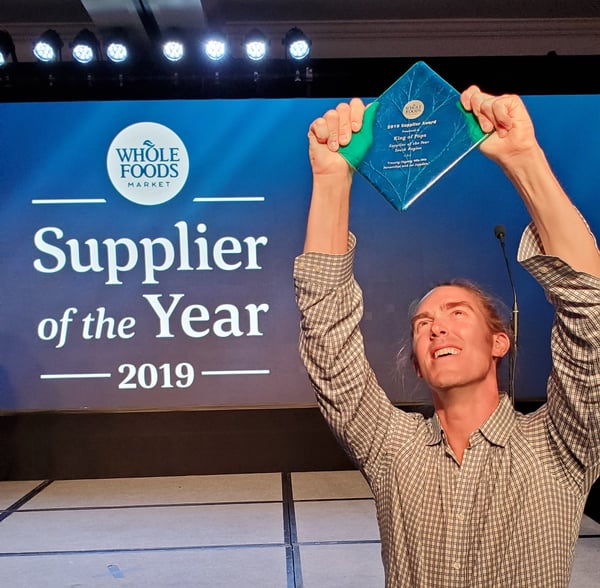 The awards ceremony was a very surreal experience as company after company came up to accept their awards. I couldn’t help but think that most of the folks in the ballroom, who like us were patiently waiting to see what award they had won, had a much different journey than we did. I pictured large budgets, seasoned executives and significant resources.

At the very least, I thought, they must have had a plan.

For us, landing on the shelves of Whole Foods was a happy accident. I didn’t know it at the time, but one of our customers that first year ended up being a buyer at the Ponce Whole Foods store.

Our pops were just wrapped in clear film back then. We knew the flavor because we had made them a few hours before and could identify the colors. If the pop color wasn’t enough, we would use different colors of ink on the sticks of pops that shared a similar color. 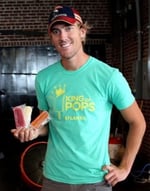 (All of our chocolate pops ended up being about the same color of brown. Chocolate Sea Salt always had a blue stick because the blue represented the ocean, you know, the home to lots and lots of wonderful salt…) While this was cute, and worked for our tiny pop cart business, it wouldn’t work for Whole Foods.

All of this was going through my head as Justin asked if we’d be interested in selling our products at his store down the street. “Yeah, that would be great,” was about all I could muster.

Getting a wrapper that actually told people about the product was a big enough problem for us to solve, but the list of concerns went on and on. What would we sell them for? How would we get them there? Which flavors should we choose? How long was the shelf life?

We had a feeling that we were building something pretty special by this point in time, but we were barely keeping our head above water. So many things needed to be figured out, and each day was a completely new challenge. 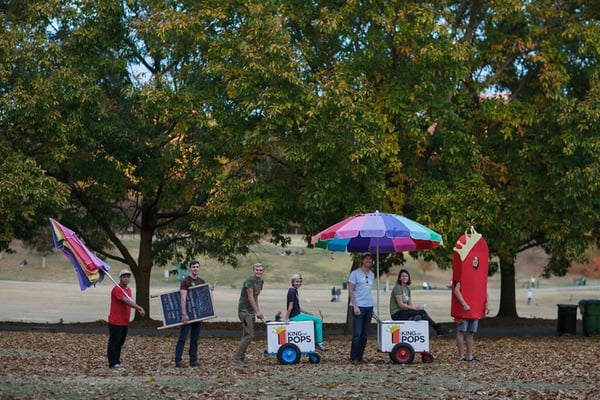 Eventually we got the wrapper thing figured out. We got a pouch printed for each of the flavors that we landed on. We didn’t have a freezer truck, but a pickup with an igloo cooler and dry ice did the trick.

That first year, my dad and an old friend, who was our second employee, made sure the Whole Foods store was stocked. Instead of selling a box of pops, we sold them one at a time. It was a lot of extra work for a lot of people in the store to do things this way, but they went with it.

The sales were good, and eventually other stores started to call. We had been selling pops at our carts for a little bit, but this was a whole new opportunity. And we knew it was a big one.

My brother Nick and I were terrified that by selling to a store our pops wouldn’t be perceived in the same way. But we decided that we would keep a pretty standard offering at Whole Foods and test all kinds of zany flavors at our carts.

The plan worked, and before long other stores started to call.

We tried our best to keep up, and we followed the path that food brands follow when they want to sell to lots of stores: we signed up with a distributor.

It was exciting to sell all these pops, to drop them off on the shipping docks with dozens of semi trucks surrounding our pickup truck.

There were certainly some problems from the get-go with the distributor. When we made a delivery on our own, we had lovingly hurried our pops into the freezer when they arrived at stores, but we learned it’s tough for a driver who is delivering several pallets to each store to do the same. More and more of our product was looking less than perfect on the shelf.

We also started to see our pops in places that didn’t necessarily make sense. Pops in some of these stores weren’t selling that well, and as they got older and older, they would start to look less appetizing.

I would get emails from friends with pictures of our pops in a store. They were trying to congratulate us on our success, but I was losing sleep over how bad they looked on the shelf.

So we went to work trying to fix this.

Eventually it became clear that the reason why a large distributor is great - their huge scale - was the same reason we were having all of these issues. They simply could not offer the level of service we were asking for. After lots of meetings and not much improvement, we decided to make a change.

We stopped doing business with the distributor. It’s common for distributors to protect their customer list, and suddenly our sales were back to where we started: a handful of relationships, lots of igloo coolers & a couple well-worn pickup trucks.

It was scary, but it felt right.

The buyers were pretty confused when we went back into the stores that we had started with and told them we were going to go back to self distribution.

That first year was certainly tricky, but our experience helped us to realize that there was an opportunity. Others must be having a similar issue.

We had plenty of room on our trucks when we were driving around town, and lots of our friends who were doing cool things were driving to these same places.

We had no idea if we could make money by creating our own distribution company, but the next year we started P10 Foods. It has grown over the years. We even have freezer trucks now (although a cooler in the back of the Prius still gets the job done sometimes).

We’ve always tried our best to bring people together. Our small distribution company hopefully continues to do that as well.

When Bobby, the president of Whole Foods South, told us why they had chosen us for the Supplier of the Year award, he said that King of Pops’ growth and sales were a big part of it. But what stood out was our willingness to mentor and help out other small brands like us.

I absolutely love being a part of this community. I love knowing the people behind the brands, and I love sharing their stories.

Together, we are still figuring this thing out, but I wanted to thank all of the brands that are working with us today and have worked with us through the years.

I’m so proud of what we have built together.

We wouldn’t have gotten this award without you.